[INTRODUCTORY COMMENTS: Although the essay below is succinct and elegant - it does not go into many details needed by most readers, especially by those who are only familiar with General Relativity, and associated gravitational ethers and membranes. This essay is like the visible portion of an iceberg. There are, however, multiple helpful links within these paragraphs. Most readers would be well served to study all of the links herein, and learn how the iceberg below supports the iceberg above the waves.] 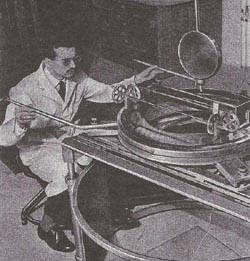 The Allais effect, or gravitational anomaly, is named after the French Nobel laureate (in economics) who described and tried to explain changes to gravity during a solar eclipse, as measured by his paraconical pendulum.

This brief gravity increase has never been explained using currently popular theories of gravity, but is easily explained with a 21st century version of push gravity with the help of gravitational lenses. In so doing, it provides a satisfactory answer, and challenges General Relativity gravity, which has no explanation.

Both General Relativity's curved space, and Le Sage's original push gravity, are expected to give similar results during a total eclipse. Both theories seem to predict that there will be a brief and slight DECREASE in gravity in the eclipse's full shadow. However, there is a slight "Allais" gravitational INCREASE when measured by pendulums in the full shadow.

In GR, a decrease would be due to two stacked depressions in the gravitational membrane. That increases the "tractor beam" effect during a full solar eclipse, so that the new "pull away" from Earth's "pull in" would yield lower net weight. In classical push/shadow gravity, there would be a combined blocking of incoming particles, leading to a very temporary decrease in gravity. Something else needs to come into play to turn an expected decrease into a measured increase.

Because GR is a failed gravity theory, there is left only one candidate theory, if "push" theory can describe the Allais effect, and it can! There is a missing element simultaneously occurring with standard push/shadow net forces, and this missing element is found within the category of "gravitational lenses." Astronomers use gravitational lenses to see background objects that could not otherwise be detected. A well known example of such lenses is the so-called Einstein Cross:

The Einstein Cross is an example of visible light bending when a background quasar (quasi-stellar object) is directly aligned with a foreground galaxy, and especially with that galaxy's core. This "cross" is an interesting example of a gravitational lens, because there appear to be five full lenses at one location. This unusual object indicates that there may also be four areas of dark matter near the core, each capturing and fully focusing some quasar light, making what appears to us as a cross.

Now that we see there are two simultaneous phenomena occurring during a solar eclipse, relative to changes in gravity on Earth, let us see exactly what is happening during solar eclipses:

There is a vast and equal net flow from all directions of the multiverse of gravitons and their associated YY particles, traveling at "c" or below. Nearly all of these particles pass through our bodies in the many trillions every second. A tiny number are absorbed or deflected by baryonic matter. Net push interactions with normal/baryonic matter establish gravitational force.

Some slower-frequency particles passing near massive objects (such as planets, large moons, stars, and star clusters) will be coherently directed partially around, and thereby focused AS IF there were a boost of energy in the quasar's light. That is the lens effect. The focused flow of primary particles (only a few of which are in visible light, and most of which are gravitons), pushes harder on what is directly ahead, along the Sun-Moon-totality line. In our case, our gravity/weight tends to slightly increase, and pendulums swing slightly faster.

Bottom line: Regular push gravity forces are always in effect from all directions, but the lensed invisible push effect is slightly greater than the ongoing decreased push effect from net particle flows.

It is tempting to suggest that General Relativity (GR) could explain solar eclipses as well as does Graviton Gravity (GG). However, that equality is not so. Thus dissolves the GR world view:

First, GR has already been disproved by its failure to explain phenomena on a very large scale, even though in the nearby everyday world it looks like graviton gravity. Either a theory is right, or wrong, in all scales of the real world. Science moves on.

Second, we can see gravitational lenses on a very large scale, but nobody has shown them working on the scale of a body as small as our Moon. Even if the Sun does exhibit this effect on photons all the time (but the Moon's lesser mass cannot) then there would be no Allais effect during solar eclipses.

Third, visible light has just the mass and energy to nicely form gravitational lenses. Electromagnetism at extremely high energy frequencies is much less affected by push gravity. At lower electromagnetic energies associated with significantly less than "c" mass/energy objects in the stream, their mass is high enough to be strongly affected by multiversal push streams. We would not see these flows as lenses. We could only measure them in this situation by their slight increase in our net gravity.