Ethers are the WD-40 of cosmology theories. They appear to fix all sorts of theoretical problems with lubrication. The problem with astrophysics is you can't grasp it all with tools of observation and experimentation. The best we can try to do is examine fragments of the cosmos, and then extrapolate these fragments to the greater whole. That inductive effort opens up philosophical, logical, and mathematical areas for error.

Once an error is made, how do we know it is indeed an error? Science uses the Law of Parsimony as a guide for guessing among options. Most cosmology is anything but simple. For example, some string theories have as many as 10^500 dimensions. By comparison, there are "only" about 10^80 hydrogen atoms in our known universe. Sheldon Cooper plays with the 10^500 dimensions in M-theory, which is why he can perpetually posture.

We humans actually believe we can grasp anything with a dose of mathematics. Problem is, as Kurt Godel proved in the early 20th century, all closed systems of mathematics are tautologies. They prove nothing within themselves, no matter how elegant they appear to be. The scientific purpose of math is to manipulate data, not create imaginary frameworks such as ethers and branes for which there is no data.

Modern physics has become like the old puzzle: "What gets larger the more you take from it?" The answer is: "a hole." When you are digging in your hole, it's better to get out while you can, than dig to China. Nevertheless, there are good reasons to keep on digging:

For example, the Large Hadron Collider cost about $6 billion to build and operate. Several thousand well-paid Ph.D.s work on the data produced there. What have they found for that six billion? Virtually nothing of theoretical consequence. Even finding a fleeting Higgs boson or two does not count for much, as the only way such hadrons could be of consequence is moving through a primordial field/ether. 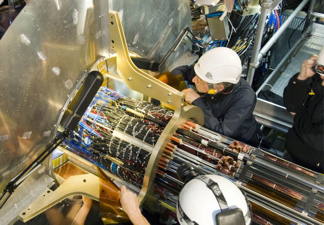 More money is going into this collider to double its power. A few more particles will be found in 2015, but not any proof of general supersymmetry, which would tend to validate ethers and branes. That's a very expensive "hole to China" for Europe's taxpayers.

There are ways to have virtual ethers. Quantum field theory fills space with virtual particles, so there is an ether-like particle universe. Today's Loop Quantum Gravity theory envisions empty space filled not with classical ethers ­ but with granular, interconnected graviton loops, so that our universe is like a spring that spirals outward from our beginnings, ready to retract for repeated big crunches. I'm not sure that's any better than what Sheldon Cooper is working on.

Einstein's aether is an integral part of General Relativity spacetime. It constitutes the "sheet" that gets bent by nearby masses, creating geodesic dips for photons to follow. It provides a continuous structure for force at some distance, and for gravity as an attractive force (within the indentations). There are pros and cons regarding his idea:

(1) Because GR math is congruent with graviton shadow gravity in the everyday zones, GR can falsely claim to be modeling geodesic spacetime.

(2) The testable "proofs" of GR are carefully kept in a region between local Newtonian frames and truly great distances. Within this selected area graviton gravity can look like spacetime gravity, and the strange world of quantum dynamics is avoided.

(3) Theories can either be pure and untestable math, or they can be experimental and testable. GR tries to be both, and almost gets away with it in #s 1 and 2 above.

(4) General Relativity gravity theory totally fails to explain super-cluster-train gravity within 1 billion l.y. That failure is like dropping a glass water pitcher onto concrete. It can't be fixed. 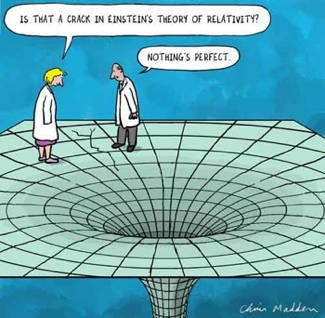 (5) Artistic renderings of GR show large masses somehow suspended above the spacetime ether. However, transform the art from one plane into all planes, and the moving masses are deeply imbedded in an ethereal sea, not floating over it. GR math cannot say there is no ether, when it is there with distortions in the spacetime metric. However, there are no spacetime ether distortions, just elegant shadow/push gravity particle fields. 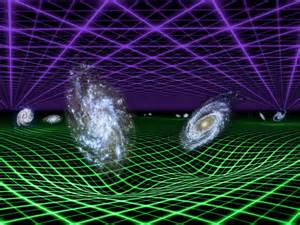 The astrophysics of Dark Matter and Dark Energy are hindered by the idea of ethers. These dark ideas got started before modern ideas of the Multiverse were developed. In contrast, shadow/push gravity explains and integrates all three ideas elegantly.

Recent theory exploring the final dimension down from gravitons is an energy/matter dimension of YY particles. Gravitons are at the 10^-37 meter dimension (below the Planck dimension's entry point of 10^-35 m). YY particles are estimated to be at the 10^-40 m dimension. At this level photons and gluons are generated and differentiated, in relation to their host graviton. Nothing in this YY theory necessitates an ether of any type; nor are additional dimensions required beyond the four that Einstein used in his Special and General Relativities.