The Universe Beyond the Multiverse 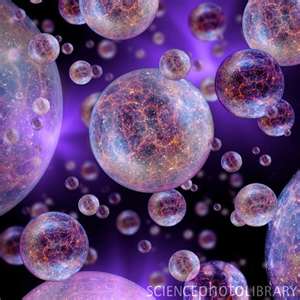 What greater mystery is there than what is beyond our visible universe, and then beyond the universe of universes, often called the multiverse? It is too easy to abandon hope for even partial enlightenment, when the lesser can never fully know the greater, and when induction and deduction have their limits. It is way too easy to just say that God is above it all, remembering that to evoke "God above it all" is to invite the specter of infinite regression, where there is no beginning. If God created or designed the universe, then who or what created God, even if the gods are outside our concept of time? Are we "divine" with or without a divinity; and just what is divine? It's all a seeming mystery.

Because I am a philosopher of physics, cursed by endless curiosity, I have found three tools to have a go at this greatest puzzle:

Where it states that mankind is created in "the image" of God, it is meant that humans have value and virtue beyond just being created. Humans (and soon, comphumans) share in the creative "god essence." We are both created and creative. Our creator could be divinity, directly or indirectly; or simply the great collection of matter and energy surrounding our lives. Our mind's eye can envision beyond what the eye sees. However, the price for this gift is ultimately to admit that there are sharp limits to what we can comfortably know, even while there are few limits to logical speculation.

Because we humans have a godlike ability to envision that which is beyond our telescopes and microscopes, then we may glimpse aspects of the multiverse. The multiverse, as I see it, is a collection of bubble-like "big-bang" universes at various ages, with a lot of "filler" among and within the boundaries of these bubbles. However, they all form one interpenetrating community with a common external boundary.

We live inside one of those bubbles. Our visible universe is mostly confined inside the Cosmic Microwave Background (CMB). Interestingly, there are ways to look at the CMB and detect "something" beyond. I have dealt with this emerging science in my essay, "Six Cosmological Fallacies." (See my http://astronomy-links.net/cosmofallacies.htm. You will need to read that essay to fully understand this essay.)

All theories of dynamic reality are ultimately system theories. There is no way to be an astronomer without understanding systems, and systems of systems. There is no way to be a scientist or historian of any kind without embracing this fundamental feedback framework. Even pure mathematical theories exist within a logical system of their own design.

More important for our search herein is understanding how all the physical systems within the multiverse interpenetrate to produce a true multiverse, not just a community of adjacent bubbles.

As explained in the Cosmological Fallacies essay (referenced above), the so-called four basic forces are actually variations on one force: gravity.

The strong nuclear force gravitationally holds together atoms, just as all other baryonic and dark matter is mutually attractive. In other words, the one unifying force presents us with a Theory of Everything, or a Grand Unified Theory. The holy grail of physics is easily comprehended within our divine brain. Einstein's bar maid could understand this.

HOW IT ALL COMES TOGETHER

The local universe in which we live is primarily expressed by the residue of its big bang. Even though there are likely many residual elements within our bubble space from previous big-bang universes (black holes, ancient dwarf and failed stars, and much dark matter), the residuum of universes past does not define our bubble. Our bubble has a kinetic boundary, in front of which is visually the CMB. Beyond that boundary is where the "fun" begins.

It is tempting to fill the void in our knowledge with belief fantasies featuring all levels of divinity (from intimate, to designing and deistic), usually in some anthropomorphic form. I prefer to stick with scientific parsimony. So it is that the clear limits of "all that is" are unknowable to us forever. We will never be able to count the number of bubble universes within the multiverse. Still, we can look at the multiverse from within the new physics, and thereby say something about its boundary and what is beyond.

Energy tends to be random until it is influenced by other energy. It is fair to hypothesize that by using multiverse gravity flows we can glimpse the shape of the multiverse at all levels from nano to cosmo. Let us start with the odd relationship between photons and gravitons:

Photons "go out" from their individual atomic sources; but they also "come in" to us from many sources. For example, photons go out from the Sun, and come in to us as sunlight. Meanwhile we are also under the influence of photons and gravitons from a myriad of other celestial sources. It is commonly thought that photons are without mass, but this is not so. Gravitational lenses show light is influenced by matter. The equivalency of matter and energy is everywhere.

It is thought that other universes may have physics different from ours. For example, "antimatter" could dominate in another universe; and our flavor of "matter" could out there be as rare as antimatter within our universe. Antimatter is just matter with reversed polarity, so that when matter and antimatter particles interact they mutually annihilate. Nice, but this has little to do with overall gravity.

Even dark matter interacts with matter through gravity. It is through the gravitational effects of dark matter on visible matter, such as galaxies and their clusters, that we can indirectly "see" dark matter. Gravity also works at the smallest known dimensions, being the universal force, though it is given other names, such as the strong and weak nuclear forces.

Feedback is the essence of every system. Without feedback there is eventual chaos, as negentropy (order) devolves into stable entropy (chaos). The multiverse has gravitational feedback which determines the shape of the multiverse itself. Consider how the minor planet Ceres is round, but smaller asteroids are irregular in shape. That is because Ceres has enough mass for its gravity to pull everything into the most efficient shape, a sphere. Old elliptical galaxies tend to form rounded shapes. Billions of years henceforth the combined Milkomeda galaxy likely may express itself as elliptical, not spiral.

Dark energy is a misnomer for the increasing gravitational attraction of matter toward the boundary of our bubble. Gravitons from outside affect our universe, because they are by chance crossing through our universe from one side to exit on the other side. They coexist with gravitons inside our universe that tend to push things toward our many gravitational centers, due to myriad manifestations of curved space as Einstein saw it. The overall distribution of forces within our bubble shifts from inward to outward approximately five billion light years from us. The rate of acceleration away from our center increases as galaxies and other matter approach the boundary of our visible universe, and approach what is beyond.

It has been suggested that the community of bubbles continues outward infinitely, so why bother with further analysis. However, nobody has ever demonstrated how such infinitude must be so. On the other hand, the second law of thermodynamics would indicate that ultimate entropy is not yet here. Therefore, I feel it is fair to continue with a negentropic analysis, given the universal force operating within systems theory.

The multiverse reveals itself as an organized whole of lesser wholes. Its rounded boundary would appear from an omniscient perspective as a slightly bumpy ball. The number of constituent universes at the boundary determines the "bumpiness" of the multiverse, with the relative size of the "bumps" being inversely related to their number.

Phenomena will be extremely dynamic within the defined outer barrier. That is because the outer level of universes will be kicking out photons and gravitons that have nowhere to go beyond where there is nearby matter. They will be attracted back to the extremely massive multiverse. It's like shooting a gun on Earth vertically. The bullet rises only as long as its initial kinetic energy exceeds the local force of gravity; and then it falls downward toward the center of Earth, increasing its kinetic energy in the return direction.

What is beyond the multiverse? It is fair to assume that there is chaotic hyperluminal energy beyond. Photons do not start fast enough to escape the universe of universes. At the same time the region of chaotic energy is not as strong near the multiverse as it is farther away. Some of the nearby random particles are attracted to the multiverse as if it were a black hole. Thus, there is a gradient outward to where chaos is maximized and entropy stabilizes.

Another view of gravitons is that they may be nearly, but not totally, massless, with less mass than new photons. If so, then they could achieve hyperluminal velocities from any frame of reference. There is nothing about the multiverse that prohibits most gravitons, often expressed in our bubble as gravity waves, from flowing through the multiverse itself. Some small portion of these gravitons are captured by our gravity fields, both macroscopic and microscopic. In this way the myriad of gravitons mediates between the multiverse and the chaotic beyond. They provide the universality of energy and matter defined by the one force, gravity.

Beyond our concepts of dimensions is the true unknown. Are there gods so distant, yet omnipresent, or merely a physical chaos we shall never fully comprehend? If there are real gods relating to us out there, they are surely different from the jealous, local tribal gods of human antiquity.