Quantum gravity is the holy grail of particle physics. The graviton itself is experimentally unknown, and individually will continue to be unknown due to its size. The best hope is to detect gravity waves, and then try to make something of that.

Right now particle physicists are celebrating their likely discovery of the elusive Higgs Boson, which may or may not be as theorized. Additional research is ongoing at the $10 billion LHC in Europe. There are 6,000 physicists from 40 countries happily employed there, now essentially given a long employment contract to go further into the realm of the extremely small.

Does all this activity supersede what astronomers are doing by looking at the extremely large? Not at all, because ultimately both endeavors are linked:

The standard theory of particle physics attempts to merge all phenomena into four forces and a few elementary particles. So far, so good; but this theory is incomplete. In reality, the gaping holes put everything else into question. Discovering the Higgs Boson shrank some holes, but others remain.

The standard theory does not yield a quantum gravity theory. Without that, we are reduced to intermediate "elementary" particles such as the Higgs for answers as to why particles have different masses. There is a so-called Higgs field which the theory says produces Higgs bosons. Other particles accumulate mass from the Higgs bosons as they plow through the ubiquitous Higgs field. Nice theory, but little facts to present so far, and the holes remain.

What is needed is a unified theory, where one force and particle determines all the others. Otherwise, scientists can find their empirical discoveries shaped by incomplete theories, which may not be evidence of what their theory presupposes.

Again, any theory worth its salt will apply on all levels of the universe, from 10 to the minus 37th power meters (strings, gravitons, and quantum foam) ... up to ten to the plus 27th power (the known universe). The idea of a multiverse could also be included in a successful unified quantum gravity theory. That should add at least two more dimensions, such as to 10 to the 29th power meters, or beyond.

Gravitons, like photons, are hypothesized to be massless, and thereby should pass through any field, Higgs or whatever, unimpeded. Any outer limit of a universe's "big bang" would be meaningless to a graviton. Therefore, we in our version of a big bang may be interpenetrated by gravitons coming from and going to areas of the multiverse, as well as from inside the bubble we know from astronomy.

Gravitons have been described by some theorists as circular strings. They could also be even more interesting: Both gravitons and photons are bosons, carriers of force. The photon's electromagnetic energy is a function of its frequency. As its frequency lessens, its magnetic or gravitational powers increase. This fact is very significant, because a successful quantum theory needs to unify everything without holes. In my conception of such a successful theory photons morph into gravitons, and gravitons can be released from their nuclear resting place as photons. Such truly elementary particles explain why one of the proofs of a Higgs is the release of two photons from proton-proton collisions.

Dark energy theory is a mess. Three physicists this year got easy Nobels for simply describing the accelerated expansion of elements inside our universal bubble. Building on Einstein's "fudge factor," modern theorists have cooked up an unknown force to explain this phenomenon. Dark energy is not the same as dark matter, as there is plenty of evidence for the existence of dark matter. All we have for dark energy is the assumption of some sort of increasingly expansive force toward the outer limits.

However, according to the Law of Parsimony, it is not good science to invent complexity when a simpler and more coherent theory embraces phenomena. So-called dark energy's expansion toward the outer limits of our bubble is simply the accelerating attractive effect (think relativistic space curvature) of graviton flows toward the less ethereal masses just beyond our known universe. The Eridanus Supervoid is a good candidate portal. Water flows downhill, and so do gravitons.

As for formulas to explain what is going on, the formulas for acceleration (both in Newtonian and Einsteinian variants), and the formula for gravity should suffice, if sufficiently understood. 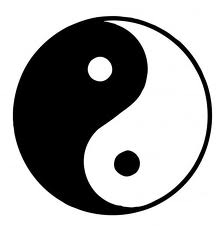 There is another dimension at work, more than just a formula, which I call the Universal Yin-Yang. Think of the symbol for Taoism, which is a circle embracing two shapes, depicted in black and white. Going around the insides of the circle we see that, as one grows, the other lessens. There are two points at the edge of the circle where one stops, and the other is at maximum strength. The process continues, with the Yin (dark and recessive) and Yang (light and expansive) exchanging places. At all other points there is a mixture of Yin and Yang. Visual poetry aside, this well known symbol helps present the laws of conservation of energy, and of conservation of energy and matter. The two small areas of light and dark within their opposites indicate the unity within opposites. Our big bang is an example of Yin instantly translating into Yang.

Therefore, in studying Higgs bosons and other tiny bits of matter/energy, we are also studying aspects of the great cosmos. Likewise, in studying the cosmos we are getting clues as to how the extremely small elements all work together. Whichever way you look at the universe, known and unknown, it all is a synchronous thing of beauty, both simple and complex to the extreme.