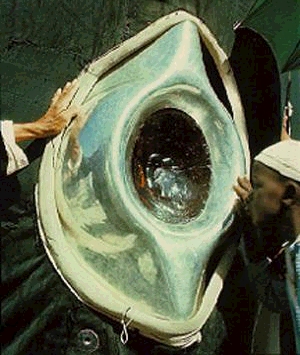 The Black Stone of Mecca

Most of us have heard about the Black Stone inside the holiest shrine of Islam, the Kaaba in Mecca. Indeed, this shrine and its celestial relic are a central part of the hajj, wherein huge numbers of hajji circle seven times around the structure. Those among the pilgrims who can get close will kiss the Black Stone, while others more distant are permitted to just point at it.

The Black Stone of Mecca is about a foot across. It represents an ancient tradition of fascination with such stones. Bethel is a Semitic word denoting a sacred stone, and we see reference to the other sacred rock in Genesis 28. Mecca's Black Stone is famous not because it has magical powers, but because of its religious antiquity predating Islam, and because Muhammad kissed it. Muslims are careful to attribute all powers, magical and otherwise, to Allah alone.

We can fairly easily spot strange, blackened stones on an open desert surface. Similarly, the vast ice fields of Antarctica are favored by modern meteorite hunters. It is no wonder that early desert people were simply amazed at finding these objects.

As befits such a revered object of indeterminate origin, there are multiple myths associated with it. One idea has it falling from the heavens during the era of Adam and Eve. This story has the object originally being white, but having since turned black from absorbing human sins. Another idea has Abraham using it as one of the rocks to construct the original Kaaba, but setting this one at a corner because of its special appearance.

During the violent early era of Islam the Black Stone was damaged. Today it is fragmented, but held together and enclosed in a silver cradle.