Arp's Loop Is Not What It Seems

I frequently change the desktop image on my computer. Recently I installed the beautiful December 9, 2010 "M81" image from the Astronomy Picture of the Day (APOD), immediately below herein. Then I got very curious about a mysterious feature on the image. 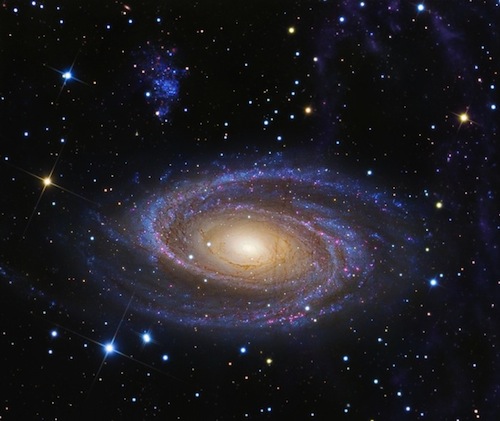 Mysteries entrance me, because they often are portals to new knowledge. In this case the mystery seems like a dust lane cutting straight across virtually the entire visible galaxy just to the right of the galaxy's core. That dark lane does not curve sharply inside this Milky Way-sized spiral galaxy, as do other dust lanes in M81. Instead, it is almost straight, and slightly curved.

In the 1960s, a half century ago, this overall feature was named Arp's loop. The initial idea was that this galactic feature resulted from gravitational effects, a tidal tail, associated with interactions between M81 and nearby M82. In 2010 a study hypothesized that Arp's loop is not merely a tidal tail from M81. Instead, it appears to be a feature found within the cirrus-like "clouds" floating several hundred light years above the plane of M81. A summary of that article is located at http://arxiv.org/abs/1004.1610. The full study is located at http://arxiv.org/pdf/1004.1610v2. Its summary has this to say:

"The morphology of the Arp's loop has been investigated with deep wide-field optical images. We also measured its colors using IRAS and Spitzer-MIPS infrared images and compared them with those of the disk of M81 and Galactic dust cirrus that fills the area where M81 is located. Results: Optical images reveal that this peculiar object has a filamentary structure characterized by many dust features overlapping M81's field. The ratios of far-infrared fluxes and the estimated dust-to-gas ratios indicate the infrared emission of Arp's loop is dominated by the contribution of cold dust that is most likely from Galactic cirrus. Conclusions: The above results suggest that the light observed at optical wavelengths is a combination of emission from i) a few recent star forming regions located close to M81, where both bright UV complexes and peaks in the HI distribution are found, ii) the extended disk of M81 and iii) scattered light from the same Galactic cirrus that is responsible for the bulk of the far infrared emission."

Here is where we must reconsider our tendency to see space in two dimensions. The ancients perceived the apparent celestial firmament in two dimensions, and it is very easy for us to think likewise. Nevertheless, space is very three-dimensional. Things that appear close may be quite distant. That is what we may have here, almost like an optical double star. It is a simple coincidence that part of what is called Arp's loop is in the same line of sight as M81, a large and bright face-on galaxy 11.8 mly away.

There are things that appear to be, but are not. Stellar asterisms are arrangements of stars that appear to be something from a given perspective, but not from other perspectives. Some visual double stars are not real doubles. The Big Dipper would not be anything like it is from a very different direction 100 ly away in space. Fortunately, space is randomly full of amazing objects, which helps increase the probability of two or more being in our line of sight, creating a visual hybrid.

I have looked at multiple images of Arp's loop, both amateur and professional, and am struck by three features that have not been clearly explained:

FIRST is the neat loop of that part which is away from M81 in the direction of M82. It is possible that this beauty is just a residue of tidal interaction from a "close call." However, the circularity of the loop in this direction leads one to wonder what really is going on ­ if for no other reason than noting that M82 and M81 are sufficiently far apart that any M81/M82 tidal tails would have distorted and dissipated long before now, millions of years in fact.

SECOND is the amazing linear nature of the dust lane superimposed over the entire visible M81. If that dust lane were the elastic product of M81 being stretched, and returning to its original shape, it would be hard to model this elastic event. Fortunately, scientists are in agreement that the nearly linear lane is above the galactic plane, not within it. Nevertheless, this agreement explains neither the real nature, nor the origin, of such a locally superimposed dust lane.

THIRD is the unresolved relationship of this loop/ring to the Integrated Flux Nebula, and to the galactic cirrus above both M81 and the Milky Way. The IFN is a region of cool matter without shape scattered in certain intergalactic regions. Here is a site that explains and illustrates this phenomenon: http://www.galaxyimages.com/UNP_IFNebula.html It is worthy to note that nowhere else in this intergalactic volume are there galaxy-sized dust rings.

What then could create such a structure? I hypothesize that this structure is primarily the remnant of a nova's explosion above our own galaxy, a portion of which is by chance superimposed on M81. It would therefore be a much smaller event than something associated only with M81, being nearby within our own galaxy ­ but it would appear large by perspective if seen only in relation to the much more distant galaxy.

All the pieces for a coherent theory are in place: A nova sufficiently ancient will only have a shock wave, or density wave. Nice small structures, such as M57, are more recent. An ancient nova's faint remnants even a few hundred light years away would not be easily detectable by ordinary means. Modern surveys of the Milky Way's galactic cirrus, and of its Integrated Flux Nebula, would pick up something like this. Arp discovered this structure from Palomar Schmidt plates in the mid 1960s, and his name got attached to the "loop." I suggest a better name for this ring (not a loop) is the Roanoke ring.

A nova does not expel nearly as much matter as does a supernova. However, its shock waves continue outward through the void, interacting with surrounding local nebulosity on its way. At the leading edge of its density wave within the IFN we would expect to find a compression of dust that could form a narrow and darker gently curved dust lane. Sufficient galactic dust in the form of the "cirrus" would provide enough matter, beyond the small amount of matter ejected from the nova itself, to allow the creation of a ring and density wave dust lanes. Place this expanding structure over and in line with the center of M81, and you have one hypothesis that explains more than where we are today.

Beyond this famous Integrated Flux Nebula within the MW are uncounted others without a lucky background. The following image (APOD 5/12/2008) shows both the M81 ring and another partial ring toward the lower right. It is partial likely due to greater age and/or different distribution of nearby nebulosity. I have seen similar partial and whole rings in other images of the Milky Way's IFN. These structures do not appear by accident or magic. They are historical artifacts.