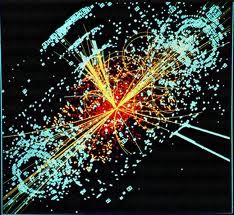 The LHC (Large Hadron Collider) is being refitted for reopening in 2015, at twice its previous power. Meanwhile, physicists are examining data already collected, seeking to confirm both the likelihood that they have detected a Higgs boson, and understanding what they likely have found.

It is increasingly believed that they have indeed discovered direct evidence of a Higgs boson. This is the sole remaining boson needed to complete the standard model of physics.

Let's see what $10 billion dollars and paying the salaries of 6,000 physicists has actually accomplished:

The very name of this expensive project identifies its golden grail, the Higgs boson itself. The significance of this particle is associated with what is called the Higgs Field: http://simple.wikipedia.org/wiki/Higgs_field

The universe is believed to be not empty, but full of pure energy. Inside that omnipresent field cruise Higgs bosons, massive particles that disturb the field such that previously massless particles can slow down as they pass through. Slowing down their speed adds mass to these particles. With acquired mass they gain the ability to adhere to each other through electromagnetism, thereby building the universe we know. Otherwise, with no such Higgs field, massless particles would zip around without the gravitational power to stick to each other. Anyway, that's what the standard model says.

There are multiple problems with this "solution." First and foremost, the standard model does not explain gravitons. Nor does this model explain dark matter. That's equivalent to a three-legged table with only two legs.

The idea of the LHC was to generate many particles never before seen, or even theorized. That alone would open up many experimental possibilities for refining theoretical physics. What kind of Higgs boson did they find?

Marc Sher, professor of physics at William and Mary University, has spent many years focused on Higgs boson theory. He had this to say, as reported by The Virginia Gazette:

Physicists are happy that the Higgs results fit with the Standard Model, the physicists' inventory of the particles and forces from which the universe is assembled. For Sher, the results are the vindication of a career and verification of a great deal of work. Despite all that, he maintains that the much-anticipated Higgs results add up to a nightmare scenario.

He explained the CERN experimenters have proved existence of a conceptually nice and neat all-wrapped-up Higgs boson. Anomalies or oddities that arose along with the Higgs discovery would have represented entry points for new physics.

"Then it would mean that there's something we could learn, something we don't understand. But when it's exactly what you expect, you don't learn much," he said.

I seriously doubt that doubling the power of the LHC will solve this problem, because it not just a problem of incremental measurements. What we are looking at is analogously the resurrection of the 19th century quest for the "missing link" in human evolution. Nobody has found a unique missing link of human evolution, but we have found many links that were previously hidden to anthropology. That may be the real value of the LHC project.

Consider the over-amped hype for the Higgs boson, "the God particle." To equate any thing with God is to set oneself up for failure. Let's not forget what happened to the builders of the Tower of Babel. They had a good idea reaching up into the heavens to find their god. Their technology was too weak. Had the tower really gone high, they would still be below typical mountains. Up high is where we like to place our gods, thus the Olympians; and thus the reported ascension of Jesus into the clouds and into Heaven. Maybe Heaven is right here with us, and "out there" too. Maybe Heaven is with us in parallel dimensions that we cannot independently detect.

Because there is so little known about this version of the Higgs boson, it is still possible that this primary particle may itself be composed of smaller particles. Furthermore, just saying that this particle has mass is not to explain how it got its mass in the first place. Let's not build our castles starting with the second floor.

This scientific detective story has multiple hints as to the real "god particle." Just as an omniscient, omnipresent, omnipotent being would be God, it is fair to claim that an omnipresent component also has a limited divine claim. In other words, without that natural "divinity" all that we know would not exist. Sounds like a claim for the Higgs boson; but the Higgs we have found falls far short, and so does the underlying Standard Model.

If so, the graviton could be the de-facto "god" particle. Of course, even if gravitons serve this mass-creating role for physics, we cannot logically rule out any sort of omniscient omnipresence within other dimensions that we have not yet detected. Absolute unknowables, where we cannot ever measure infinity from our finitude, and where our tools cannot see and measure down to the negative 37th meter dimensions, do not distress me. I like metaphysical wiggle room for my logic and imagination.